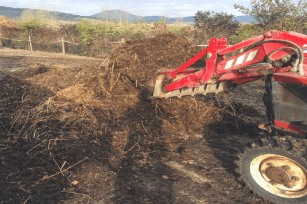 ‘Biodynamic’ is a pretty common buzzword in winemaking, with roots dating back to the Second World War. It is based on the then cutting edge works of an Austrian Philosopher presented in 1924 – Rudolf Steiner – and centres around a holistic and homeopathic approach to farming. This approach forgoes the use of any inorganic materials to treat and tend the vineyard, drawing instead from the influence of the four elements (earth, water, wind, fire) and the interconnectivity between terrestrial and celestial bodies. All biodynamic farming follows the practices for organic viticulture; no synthetic herbicides, pesticides, fungicides or fertilisers, or any genetically modified organisms may be used, with greater restrictions on the use of sulphur dioxide (S02)*. In addition to such constraints on the use of chemical additives, manufactured products including cultured yeasts may not be used and so all fermentations occur spontaneously from naturally occurring yeasts. The main thing that sets it apart from organic farming, though, is the use of various specified compost and spray ‘preparations’ (#500-#508) to treat the land area ahead of sowing, cultivation, etc. and during the growing season, in order to maintain soil fertility, improve soil vitality and ‘promote humus development by drawing in ordering forces from the cosmos.‘ These preparations harness the ‘power’ of the earth’s organic, naturally occurring products and details of the nine preparations can be found in Steiner’s work; some may raise eyebrows and others cause concern, but they are recognised by the two certificating bodies of biodynamic farming – Germany’s Demeter and France’s Biodyvin.

The focus is not only on the organic materials used, but the ways in which these are prepared: the use of cow horns connects astral-ethereal powers to the terrestrial; the preparations are added to water and rhythmically stirred for an hour, first clockwise then anti-clockwise, ‘dynamising’ the mixture before the vineyards are treated:

‘…produced in this special way, the preparations develop a strong yet subtle power whose effect may be compared to that of homeopathic remedies.‘ (Demeter)

Though complex and time-consuming in their preparation, the various compounds created are applied in relatively small quantities over the entire farmed area.

The most notable addition to the Biodynamic cannon and to Steiner’s work was Maria Thun’s ‘biodynamic calendar’, which offers guidance so that key tasks such as planting, pruning, picking and, in our case, bottling, are all timed to benefit from both celestial movements and ‘formative forces’ of the earth. Her work also alluded to the benefits of tasting a wine on a root day vs. a leaf day… Its main principles attest that, based on the moon’s movement through each of the twelve constellations of the zodiac, each is associated with one of the four elements. Three constellations are connected to each element, and each element is related to a part of the plant: earth – root; water – leaf; air – flower; fire (sun) – fruit. So, for example, were you sowing or harvesting carrots, an earth (root) day should be chosen; for lettuce, a water (leaf) day; for beans and apples, a fire (fruit) day; for cut flowers and broccoli, an air (flower) day. Choosing suitable times for cultivation as well as for sowing and harvesting, purportedly allows the farmer to benefit more greatly from these movements. Although the waxing and waning cycle of the moon is the most well-known lunar rhythm, it has little influence over the biodynamic calendar.

Aside from the spiritual and cosmological, the intention of the biodynamic paradigm (and organic farming) is to develop and encourage microbial life in a symbiotic vineyard system. However, dissecting the whole and leaving those more esoteric aspects unchallenged does not make for an accountable assessment of the biodynamic agricultural model.

‘Organic wine’ is a fairly recent term, introduced in the EU in 2012 to cover wines made from ‘organically grown grapes’ with limitations on the use of S02 – though organic wine produced or sold in the US may not contain any additional sulphur dioxide. Organic viticulture precludes the use of industrially produced herbicides, pesticides, fungicides or fertilisers as well as any genetically modified organisms. It places the onus on vineyard management techniques to cultivate a healthy vineyard system with an abundant and diverse range of soil microorganisms, to prevent rather than cure vineyard pests and disease. Both concepts seek to increase biodiversity and stabilise the ecosystem of the vineyard, and there have been various studies concluding that vineyards employing either technique have seen noticeable and beneficial effects on soil and vine health to the point where chemical fertilisers and pesticides are no longer required. Some argue that this can lead to more complex, terroir-specific wines.

Regardless, biodynamics remains a contentious subject around which there are diverse points of view. What is important to note is that biodynamic farming alone does not guarantee a great wine. Modern mechanisation and farming methods have negatively impacted biodiversity in many commercial vineyards, and both organic and biodynamic farming aim to reform and improve this. What I will say is that winemakers and vineyard owners, as custodians of the land they tend, have a duty of care to the environment within which they coexist and this should not be taken for granted – wine is a luxury, not an essential agricultural product. What might also be said is that many who have embraced organic viticulture or taken the steps to convert to biodynamic farming are likely producing great wines from excellent quality fruit, from an already increased devotion to the vineyard and to the plant. However, there is little scientific evidence to support confident assertions over the efficacy of biodynamic farming. Of the few successful scientific studies carried out, the most complete scholarly work on the subject was published by The American Horticultural Society and authored by Linda Chalker-Scott, and forms the majority of the published results available. I find it difficult, therefore, to justify the additional costs of the application of Steiner’s anthroposophy (given that it was so heavily based upon the spiritual), despite this being in response to what he considered the degradation of crops and plants by the use of manufactured chemical herbicides and pesticides. Meditation and clairvoyance, after all, have seen little intellectual challenge nor academic advancement since his theorisations nearly 100 years ago.