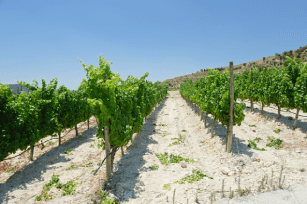 While this isn’t an exhaustive list, we have recently shipped some exquisite wines from Cyprus and sampling these was my first exposure to some of the indigenous varietals that many Cypriot winemakers are understandably so proud of, which form an integral part of their wines. Cyprus, along with Santorini, is one of the only European wine regions where Phylloxera has not spread and so all vines remain ungrafted, which means some seriously old vine stocks.

Xynisteri enjoys limestone dominant soils from the majority of the island (and much of the fame) comprising around 13% of Cypriot vineyards, making it the most popular white grape. It performs best at altitudes where cooler temperatures lengthen ripening, and the wines produced show a taut, mineral character along with citrus and stone fruit flavours when fermented to dryness. It is naturally lower in acidity and so lends itself as a blending partner to other higher acidity varieties like Sauvignon Blanc. The variety has a long history as the base for Cypriot sweet wines where the grapes are sun-dried to concentrate the sugars (along with ‘Mavro’ to produce PDO Commandaria wines and in the production of Zivania, the local spirit). 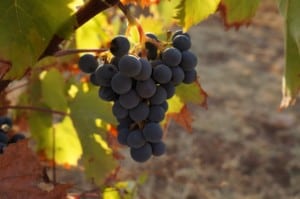 Maratheftiko is considered Cyprus’ premium red grape variety, producing rich wines with soft, supple tannins and flavours of red and black cherry and chocolate. It has a fine affinity with oak and has the potential to produce long-lived wines. Traditionally, the grape made up part of field blends to add colour and body to the more extravagant ‘Mavro’, though winemakers are now starting to see the potential of the variety and single-vineyard plantings are becoming increasingly common. One hurdle to the development of high-quality Maratheftiko however, is that it is not able to self-pollinate and so must be planted alongside other varieties which flower at the same time, commonly Spourtiko.

Yiannoudi, a variety thought long-lost but recently rediscovered, is thick skinned, deeply pigmented and can produce firm, richly coloured and highly tannic red wines. With ‘female’ flowers, it too must be co-cultivated with varieties that flower around the same time, which has a noticeable effect on potential yield where Maratheftiko, for example, is still able to yield bountifully in the right conditions.

While Lefkada is not strictly indigenous to Cyprus (it originates from central Greece and was brought to the island during the Byzantine era) it has presented Cypriot winemakers with an intriguing challenge. Bunches and berries are small with thick skins and so taming the tannins is a notable obstacle – at lower altitudes the grape ripens fully but with high alcohol and can produce a mushy flavour profile, losing the fresh red fruits and herbs it has the potential to show; at higher altitudes tannins struggle to ripen fully, producing astringent wines. But with experimentation it is proving to be a worthwhile endeavour with interesting and fine results for some, delivering wines of intense structure, flavours of ripe red berry, cherry and woody herbs, and some savoury notes. 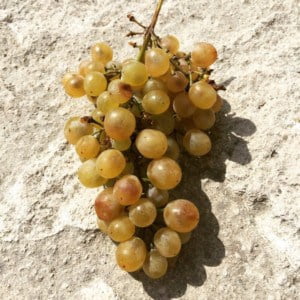 Promara is another indigenous white grape variety, long-forgotten but recently rediscovered. It is the first grape to ripen fully and, typically, the first to be picked in Cyprus hence the name (which roughly translates to ‘early ripening’). Presently it accounts for just 1% of plantings; with thick skins and a lowish skin to pulp ratio, it yields less juice per kilo of grapes – a consideration where quantity not quality might be one’s goal. However, when cultivated with care it can produce a textural, medium-bodied white with a complex aromatic profile of stone and citrus fruit whilst retaining a refreshing acidity.

Morokanella grapes are pale (almost near-white in colour) and the variety was largely considered responsible for flabby, neutral wines. With improvements in winemaking and site selection however, and when grown at controlled altitude and fermentation temperatures, the resulting wine can be intensely floral, elegant and very pretty. Interest is piquing and many Cypriot producers are keen to explore the potential of this indigenous grape.

The name Spourtiko means ‘bursting’, a reference to the large berries’ fragile thin skins. It has a relatively short vegetative cycle, but is a hardy vine which shows good resistance to various vine diseases. It is a fairly neutral variety, with lemon and grapefruit aromas, and produces wines with modest alcohol. It is thought that any floral aromas one may find in the fermented wine are from the alcoholic conversion rather than the grape itself. Finally, it is most commonly planted with Maratheftiko to allow for cross-pollination.